In early June we took a much-needed weekend away from the farm. Our official mission was Toketee Falls, but we'd soon learn that there was no shortage of beauty along the eastern portion of the Rogue-Umpqua Scenic Byway! (Patrick's parents lived nearby when they were young and he grew up in Eugene, but he'd never visited this area of Oregon... Boy, did I hear about that the whole weekend - "I can't believe my parents never brought me here when I was little!" was uttered at Every. Single. Stop. along the byway.) 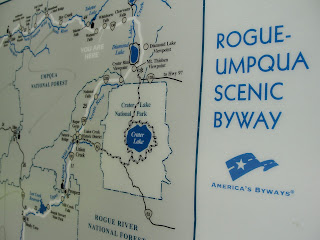 Our first priority was a campsite for that beautiful, sunny weekend. Early Friday afternoon we made our way to Natural Bridge's first-come campground where we hoped to land the coveted #16 site by the river. Alas, that site was taken - actually, most sites were already taken - so we quickly secured a spot and set up while other hopeful campers searched in vain for available sites. 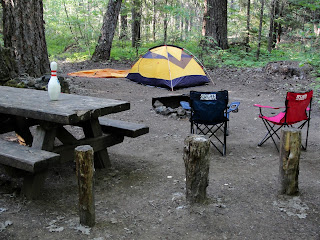 From the campground you can walk to an interpretive trail to the Natural Bridge, so we did. The “bridge” isn’t terribly photogenic, but it is pretty awesome – an ancient lava tube formed a natural land bridge through which the mighty and majestic Upper Rogue River runs. 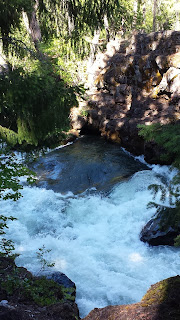 We still had some daylight after this brief walk, but instead of continuing a few miles along the Rogue Gorge Trail up to aptly named Rogue Gorge, we hopped in the car and headed north to grab firewood in Union Creek. To save time the next day, we decided to hit National Creek Falls while we were in the area. It was an excellent 40-foot introduction for what was to come… 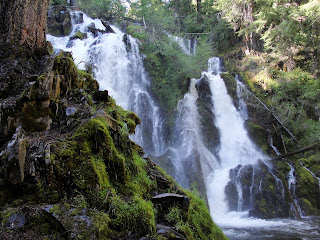 Back at camp we scarfed down a salad in the car to avoid the hoards of mosquitoes - I didn't even take a picture, that's how distracted I was - and enjoyed an otherwise quiet evening of a quick fire and bug-free reading from the safety of our tent.

Saturday morning we scarfed down breakfast in the car to avoid the hoards of mosquitoes - dear lord, they were awful! - and then headed north toward Toketee Falls. We attempted a few short walks in the Diamond Lake area to break up the drive but the trails weren't quite ready for prime time... 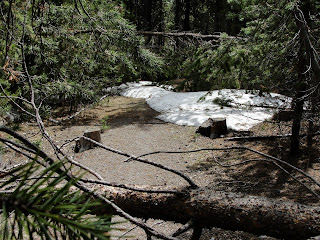 ... so we stopped at the lake and admired Mt Thielsen for about an hour. 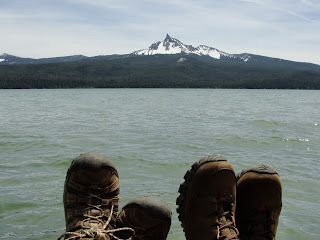 Continuing up the road, we stumbled upon Clearwater Falls... 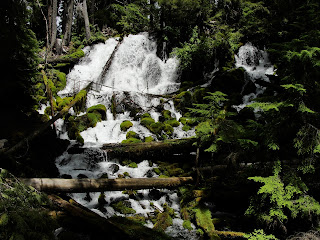 … which was also mosquito-riddled, but otherwise 29 feet of beautiful mossy cascades!

And then we stumbled upon Whitehorse Falls. At just 14 feet, it was simple, quiet, and serene. 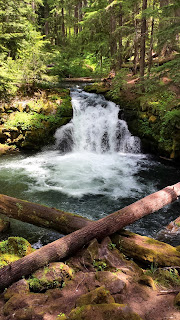 (At this point I actually read the map to make sure we didn’t just "stumble upon" - read: miss -  anything else coming up.)

Watson Falls was next on the route. Referred to by the Northwest Waterfall Survey as “arguably the best waterfall in the North Umpqua River basin," I can’t say I disagree – of the five we saw that weekend, this 293-foot cascade tumbling off a giant wall of basalt rock was by far the most spectacular to me. 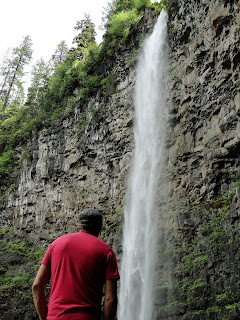 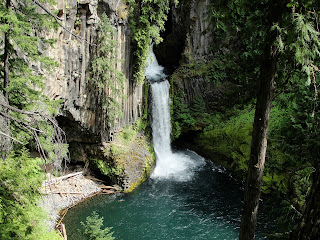 Photos simply don’t do it justice. It was the picturesque tropical paradise of solitude, even with the crowds at the viewpoint and the yahoos at the base attempting to climb the wet rock and dive into the pool. (But Watson Falls was still my favorite.)

There were a handful of folks at each of the stops before Toketee, and quite a few hiking the trail at Toketee, but the traffic didn't distract from the beauty at any of the stops.

On the other hand, Rogue Gorge, which we did finally get to, was packed. But still very pretty. 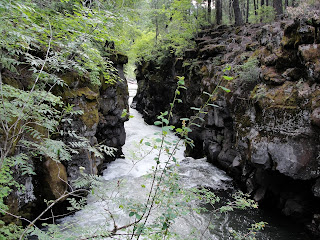 Back at the campsite that evening, the mosquitoes were just as bad as the prior night.Thanks to some DEET-free bug spray we found at Diamond Lake Resort, we toughed it out and enjoyed our first attempt at campfire-grilled cheese sandwiches with (pre-made) tomato soup. 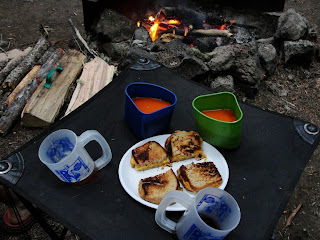 much more of this in our future, please!

And then four sheriff cars rolled through the campground. A very nice officer came over to inform us that earlier that night, a transient barefoot man had attempted to assault a woman over at the Natural Bridge interpretive trail, and if we saw him we should call "someone." (He seriously said that. Never mind that our phones got no service in the hills - we'd certainly get right on calling "someone" if we saw the assaulter.)

So that was pretty awesome. But instead of constantly scanning our surroundings and worrying every time we hit the outhouse, we chose to think about pretty rhododendron flowers along the waterfall trails instead. 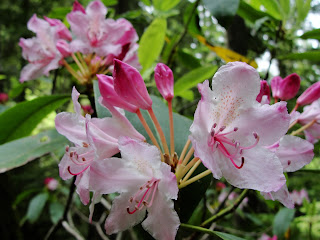 Luckily for us, that seemed to ward off the barefoot assaulter; we didn't run into him all night.

Along the way back to the farm the next day, we stopped by Crater Lake National Park's visitor center to use the cleanest bathrooms ever, and were told by the surly cashier that there was no wi-fi available - she suggested it was "Mother Nature's way of saying we should unplug and enjoy the scenery."

Oh, lady, if only you knew...
Posted by Jen
Email ThisBlogThis!Share to TwitterShare to FacebookShare to Pinterest
Labels: camping, explOregon, living like a local, pacific northwest, united states