We've seen a lot of caves over the past few years, many of which claim to be the "world's -est" (world's largest, world's battiest, etc). At 400 cavernous miles and counting, Mammoth Cave might just win the actual title of "world's longest" - at least for now! Here's a recap of our visit...

But first a few flash-related disclaimers. First, Mammoth Cave National Park doesn't allow flash photography in the caves so we did the best we could with our old, crappy cameras under those circumstances. Second, for the most part Mammoth Cave isn't one of those flashy caves with cool stalactite and stalagmite formations so we didn't even take many pictures. That doesn't make it any less amazing though! 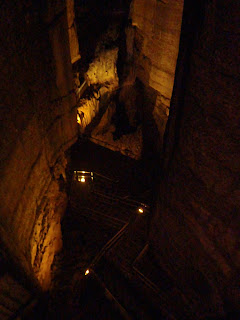 true to its name
The hikes. I guess this is the final disclaimer. Judging from the lack of hiking information we were able to get from park staff, Mammoth Cave National Park is not exactly a trekker destination - most people only come for the walks underground.

But there are some well-maintained, very flat trails above ground too. Unfortunately, during our visit the western trails we really wanted to explore were closed off from the south side and it would've taken an extra hour in the car to get to them. (Next time?) We still managed to get in 12 miles, though, so we can't really complain.

Day One: we set up camp and meandered around the trails near the visitor center for a few hours. There weren't many bluffs or sights along the paths but the forest was really peaceful and the occasional view was pretty. 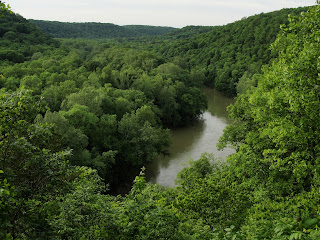 Green River - longest in Kentucky,
one of the most biologically diverse in North America
Mammoth Dome Sink was particularly cool. See, Mammoth Cave is "dry" (like most of the bible belt of southern Kentucky, haha) - the geology of the area generally prevents water from seeping in and forming those amazing stalagmites and stalactites we are used to seeing in caves. But there are tens of thousands of sinkholes in south central Kentucky which serve as natural downspouts into the underlying limestone, creating open vertical shafts in the cave system. Mammoth Dome Sink is 192 feet from top to bottom! 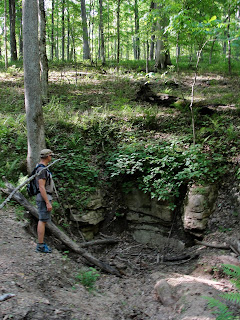 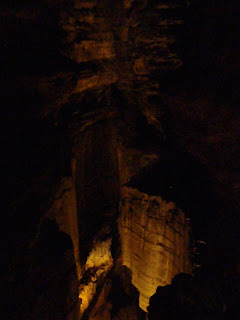 Day Two: we opted for the 2-mile, 2-hour historic tour of the cave. At first we were worried about another Luray Caverns rushed impersonal experience, but Ranger Rick was patient and informative, and our group of 58 people seemed much smaller once we were inside the massive cave. 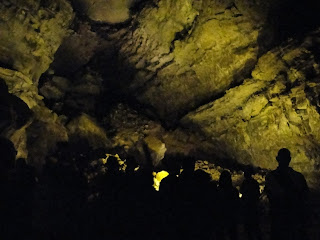 in the old "church"
(they really did hold church here back in the day)
It was also half the cost of our Luray tour... Your tax dollars at work, people. 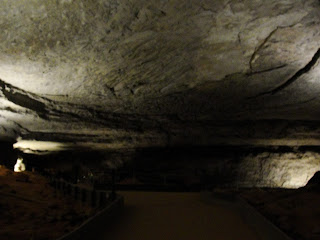 just miles and miles of stone 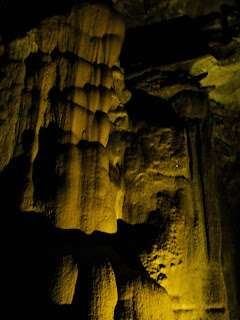 one of the few formations on the historic tour 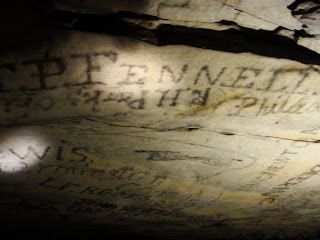 old "graffiti"
(smoke writing - they had to get pretty close to the rock to do this)
There are other tours that show more of those neat cave formations, if you are so inclined. (Given our cave experiences over the last few years, we were happy with miles and miles of plain old stone.)

That afternoon we headed over to Big Hollow Trail, one of the newer trails in the park. The 5.25 mile path weaved through forests similar to what we'd seen the day before. Definitely not a trekker's paradise... 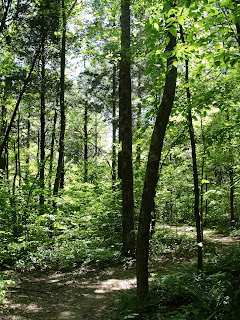 it was still pretty though
The campsites. Our plan was to stay at Houchin Ferry, the more isolated campsite of the park's three (and the one closest to the trails we wanted to explore). But the ferry to the trails wasn't running so it would have been pointless to camp there.

The park staff seemed to think we could camp at Maple Springs, the group campsite, but no one could confirm this and a quick drive-by showed an overgrown, primitive, and probably tick-infested campground.

So we begrudgingly opted for the main campground.
Otherwise it was your standard public campsite and we had no complaints whatsoever. The national park does have a lodge (which looked straight out of 1977) and the area around the park has plenty of RV camps with mini golf and waterslides, if you're into that sort of thing.

The food. Oatmeal breakfasts, cheese sandwich lunches as usual. Since it wasn't raining we actually cooked one night... and then we went back to salad the next night because our "demand" wasn't really justifying the "supply". 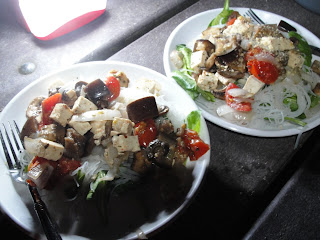 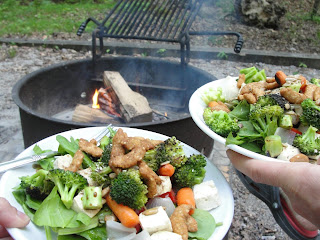 and... salad again
More photos here...
The summary. We added this park to the tour route on a total lark before we left - it's close enough to the Great Smoky Mountains and it's another national park to check off the list! But while Mammoth Cave might not necessarily be glamorous (to some), it's really astounding and totally different than any other cave we'd visited. So glad we went, and so glad we were able to check out almost every angle of the park in just two days.
Next up: well-deserved bbq, one of our favorite bands, some Nashville sightseeing and a real bed for a night... To the city!
Posted by Jen
Email ThisBlogThis!Share to TwitterShare to FacebookShare to Pinterest
Labels: camping, united states, us national parks, us road trip