Starting and ending in Nepal: Kathmandu and Pokhara.

We'd heard mixed things about Kathmandu - it's like going back in time, the airport is a mess, the city is beautiful and full of culture, the smog is horrendous ("wear a mask!"), the people are lovely, it's pretty touristy, the traffic is insane...

From our perspective, all of that was true. 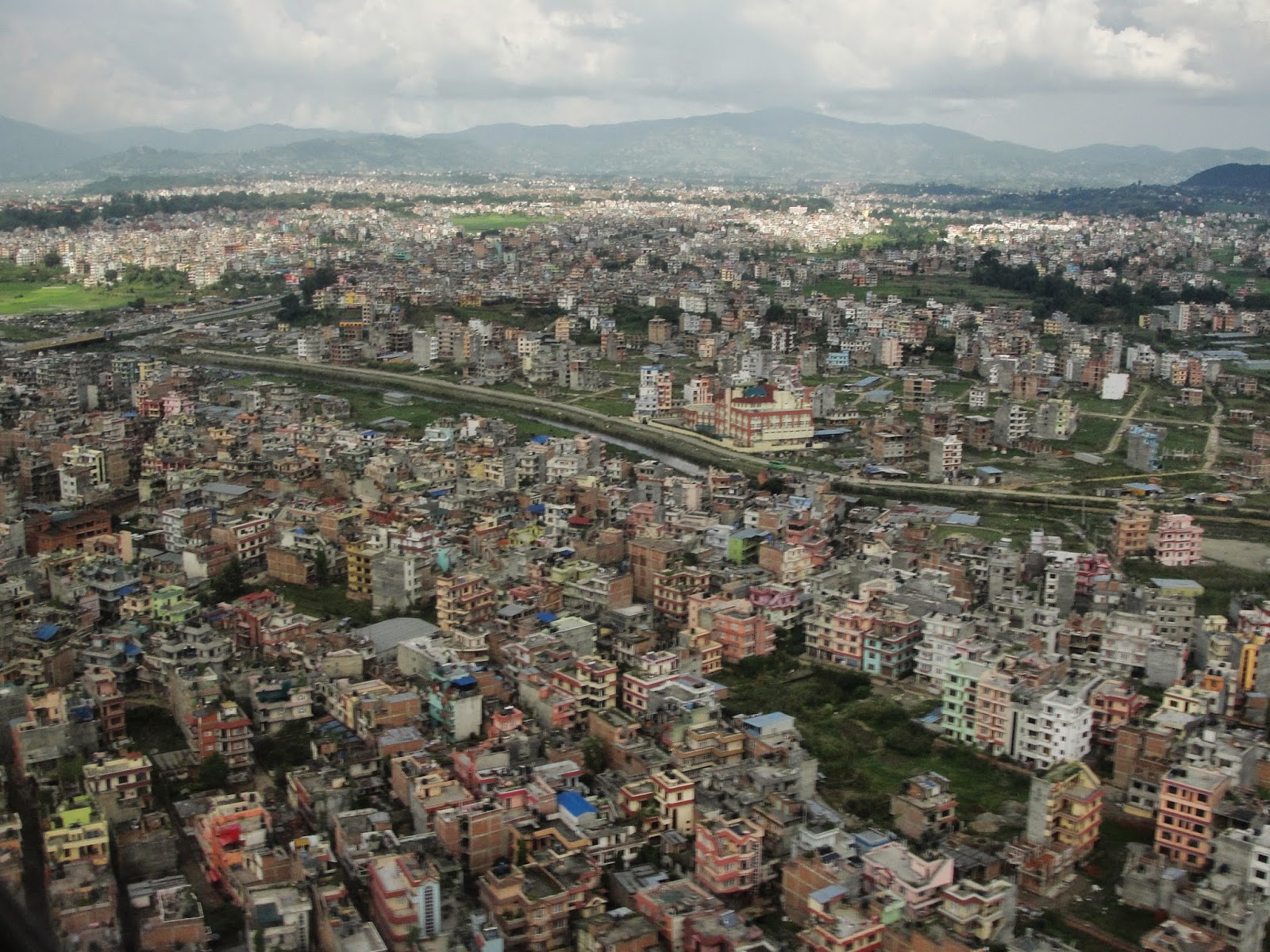 We arrived the day of a festival. In a haze of jetlag, we watched our taxi weave through dusty unpaved streets, narrowly avoiding hundreds of Hindu ladies dressed in beautiful red saris who had danced at the festival. (I wish I'd taken some subtle photos - they were all stunning, especially against the backdrop of dull brown buildings and dirt roads.)

Later that day and the next day we wandered around the outskirts of the tourist area to get a feel for the city. Masses of people, cars, motorbikes, cafes, narrow medina-like shops along the side streets selling anything you could possibly need... 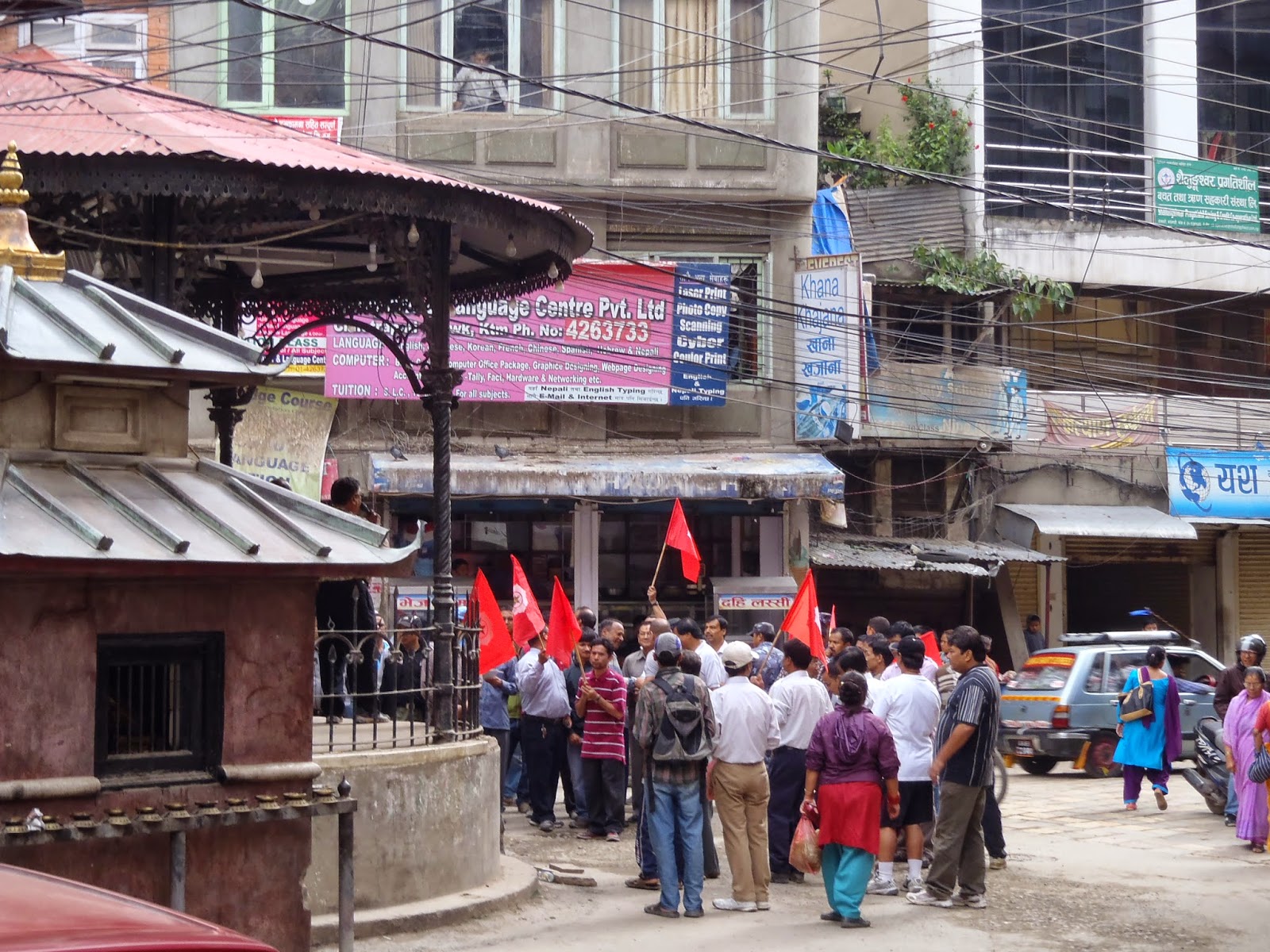 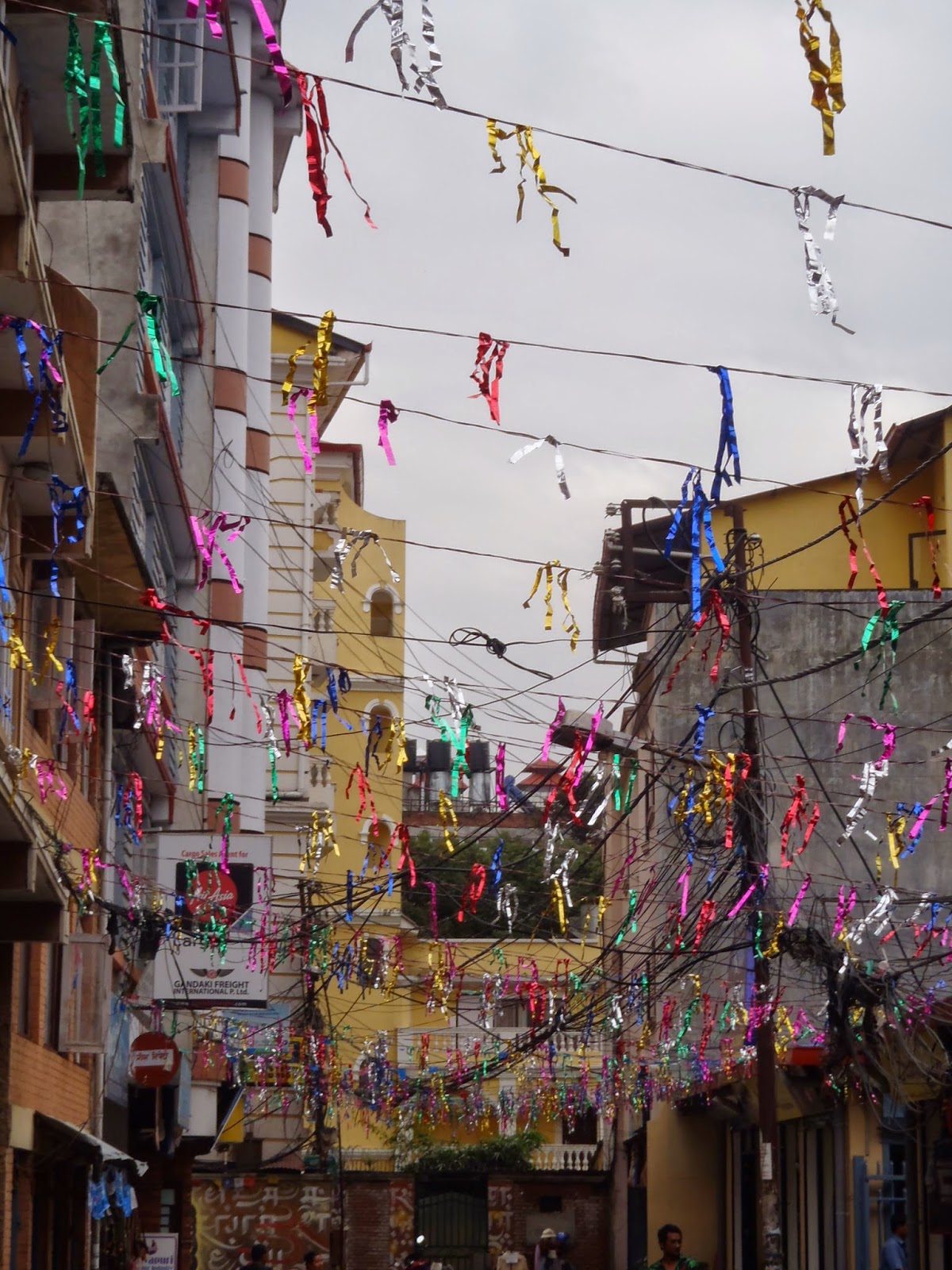 not sure what these flags were about,
but they were pretty

Kathmandu had an energy like we'd felt in western Morocco only there was something much more positive about it. Crazy motorbikes aside, we really liked it.

We spent about five days in Kathmandu, half at the very beginning and the other half at the very end. For convenience and trek prep reasons we spent more time than we would've liked in the tourist part of town. This is where the cheap gear is sold, where the restaurants have western food and Nepali/Indian dishes are written in English on menus, and where you can get a really good cup of coffee (for a price). 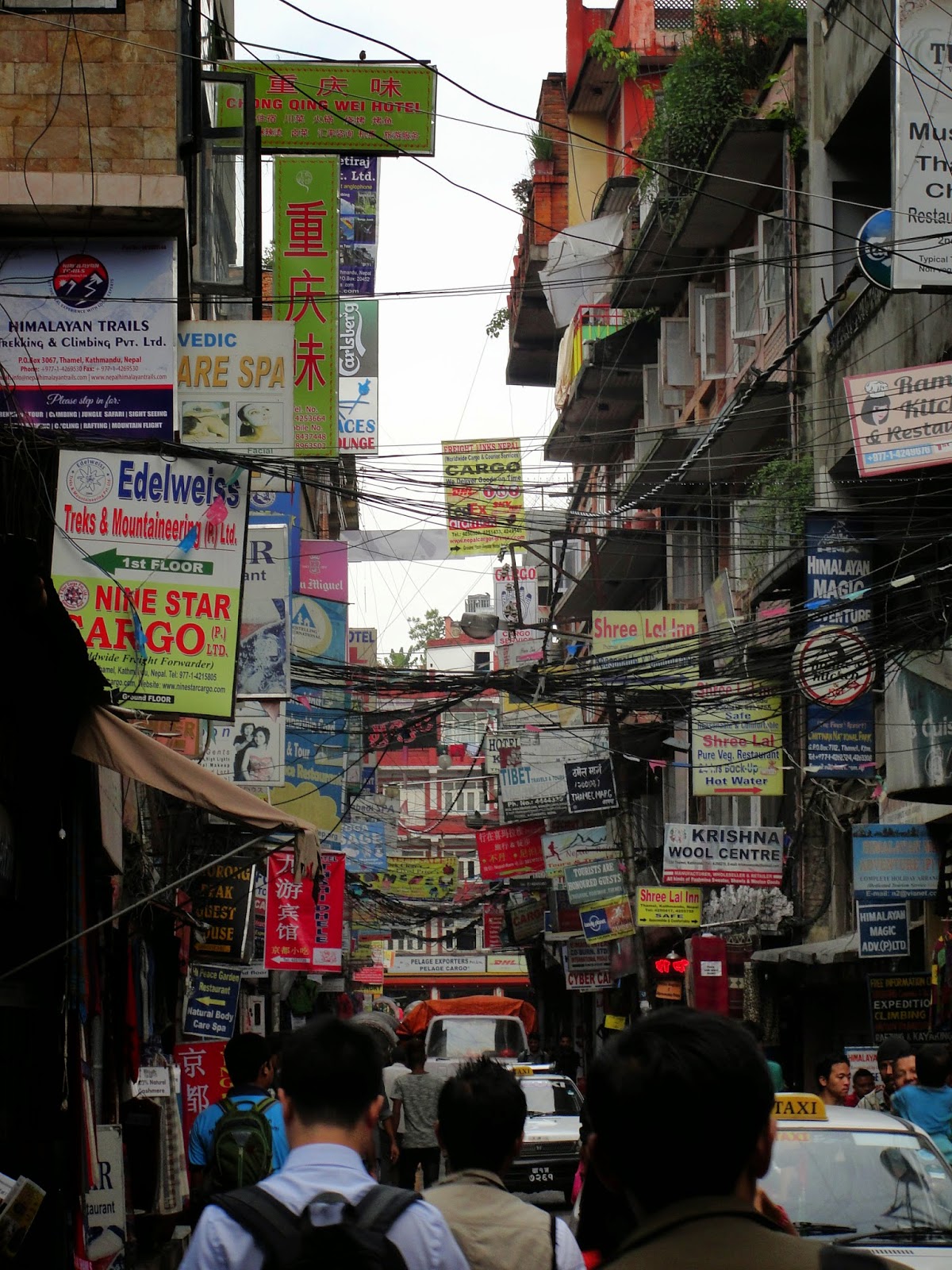 On every corner we were barraged by cyclo drivers wanting to give us a ride or people pushing trekking guides, trekking companies, Tiger Balm, musical instruments, you name it. I was constantly approached by men wanting to fix my holey boots. The conversation always went like this:

Sometimes this went on for a minute or two. A few of the men actually seemed pretty concerned about my boots, frowning and pointing to the year-old holes as they peddled their assistance. One guy followed me down the street pushing his boot repair service, saw me again ten minutes later and followed me back up the street.

Yep, a lot like western Morocco. Only they were a lot nicer here. And no one offered to give Patrick a shave.

Pokhara, our three-night stop after the Annapurna Circuit, was quite different. The streets were paved, there were actual sidewalks, there was a beautiful giant lake in the center of town... 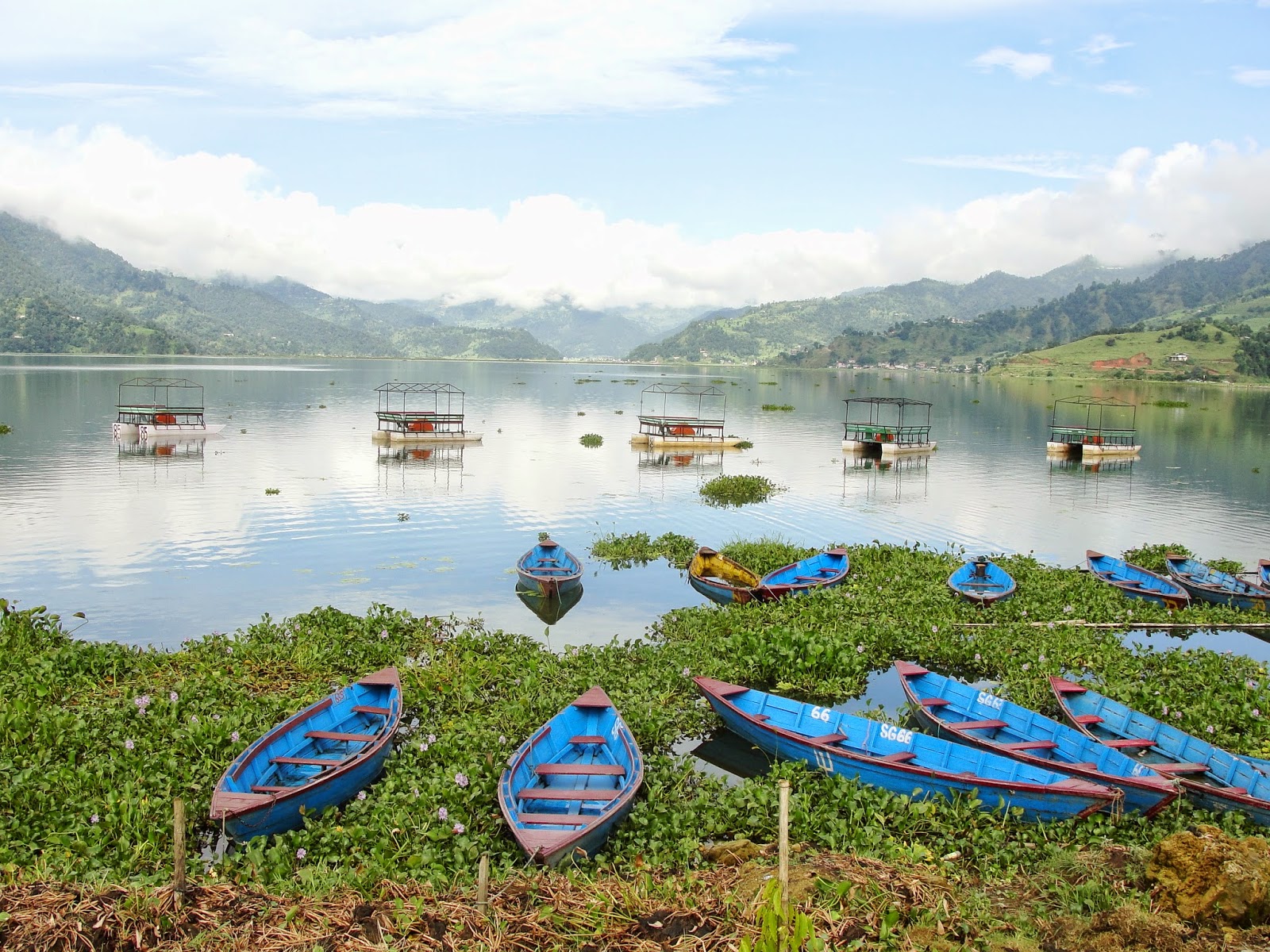 Really nice houses lined the streets skirting the center of town and even the outskirts of town were far nicer than anything we saw in Kathmandu. Everyone spoke English and half the people you saw on the streets were tourists... After a few days we'd had enough and were ready to get back to Kathmandu's craziness.

Seven days sounds like forever but we actually didn't have a lot of time to take in cultural sights in either city. We did briefly visit Patan, one of three royal cities in the Kathmandu Valley which dates back to the 14th century. Even though it's a tourist destination, locals pretty much leave you alone so we spent an afternoon just wandering. Patan is a mecca for artisans but we didn't see too much of that - we mainly checked out Patan Durbar Square (really beautiful) and nearby Mahaboudha Temple featuring thousands of tiny terra cotta carved Buddhas (so cool!). 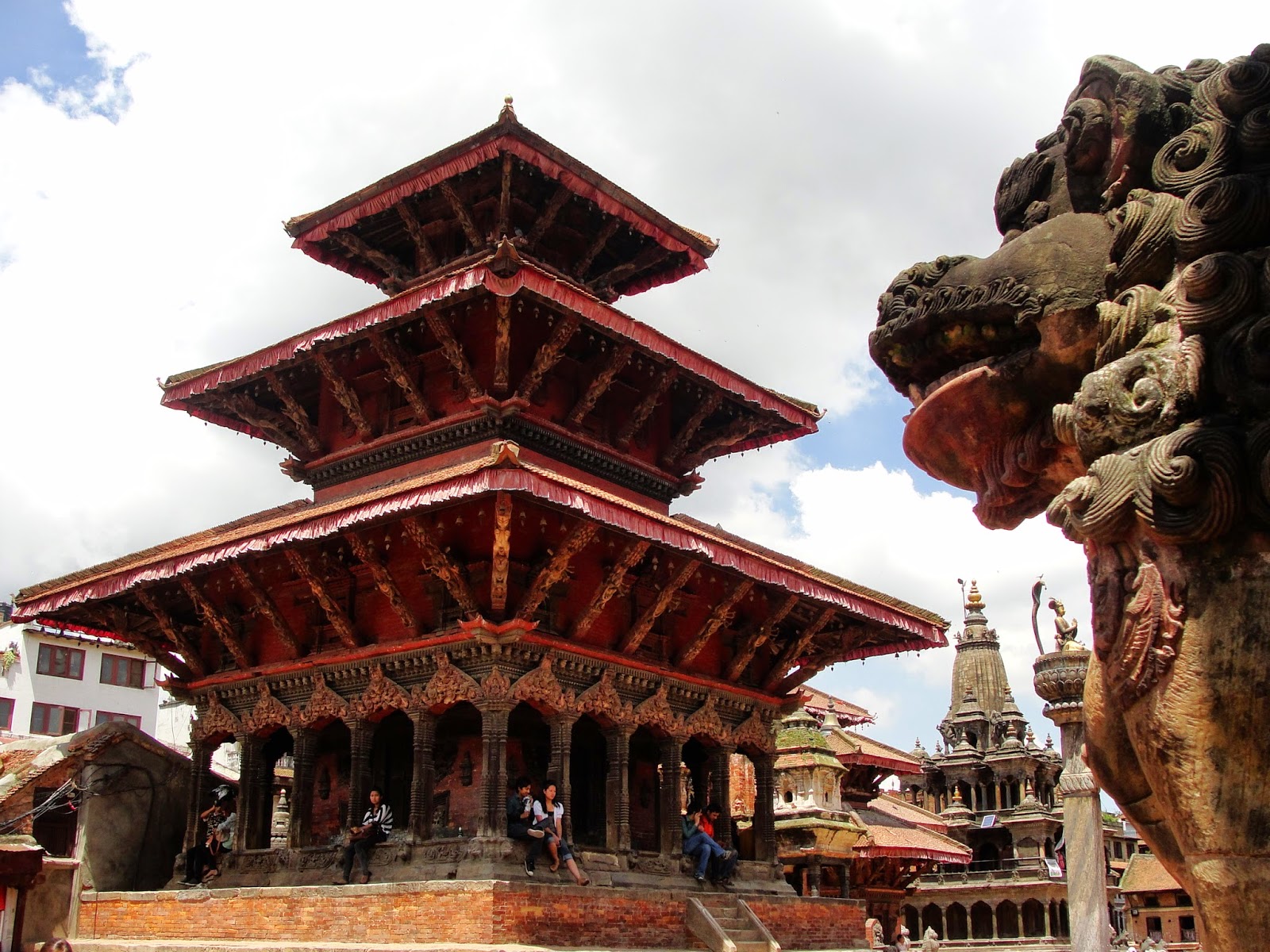 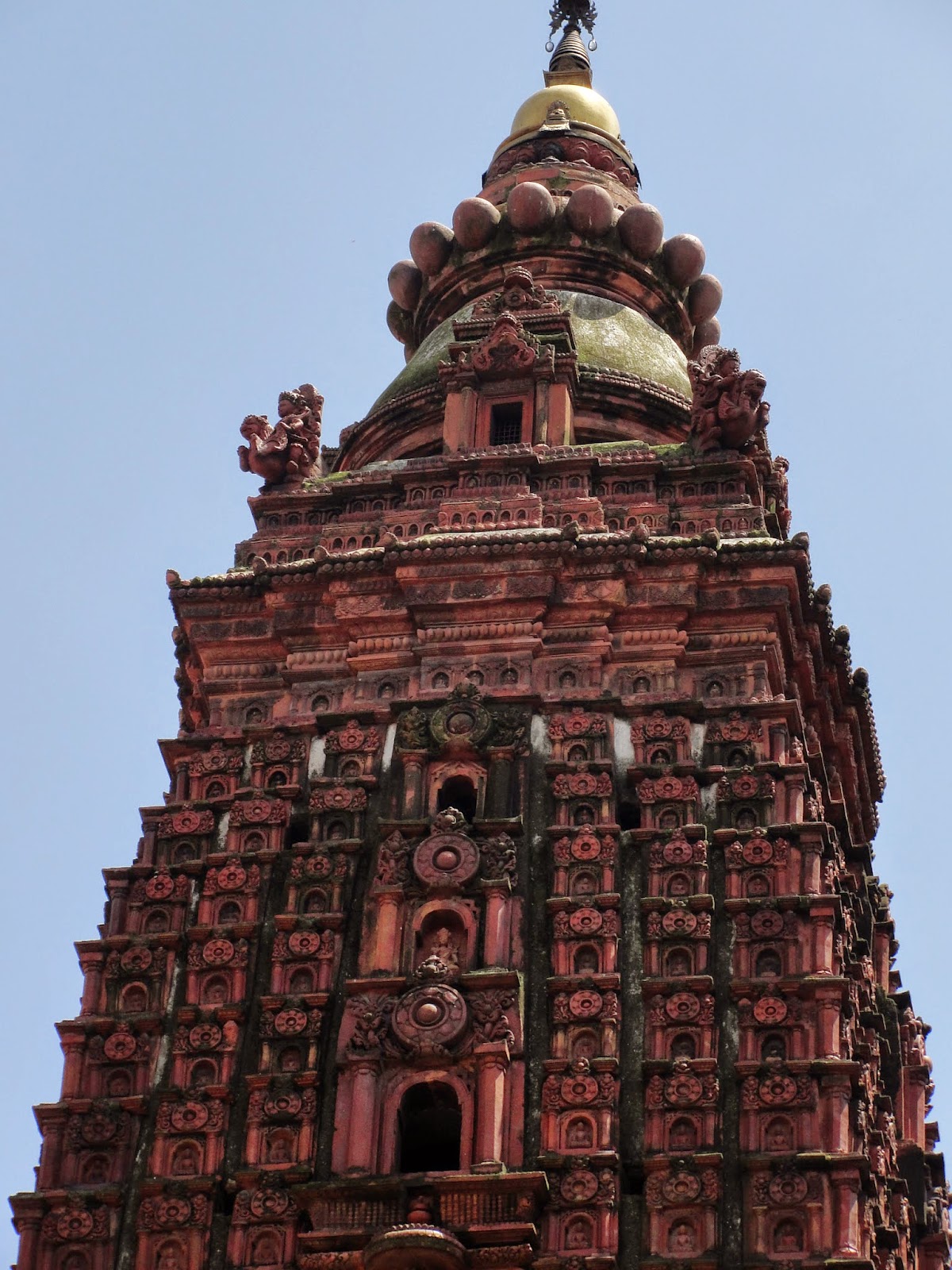 take one down and pass it around,
999 statues of Buddha on the wall

We also briefly visited Swayambhunath Temple, one of the most sacred Buddhist sites in the country. It was an interesting site but a lot of the symbolism was lost on us despite the efforts of a nice local man who gave us a very fast-talking unsolicited tour and then held out his hand for payment. 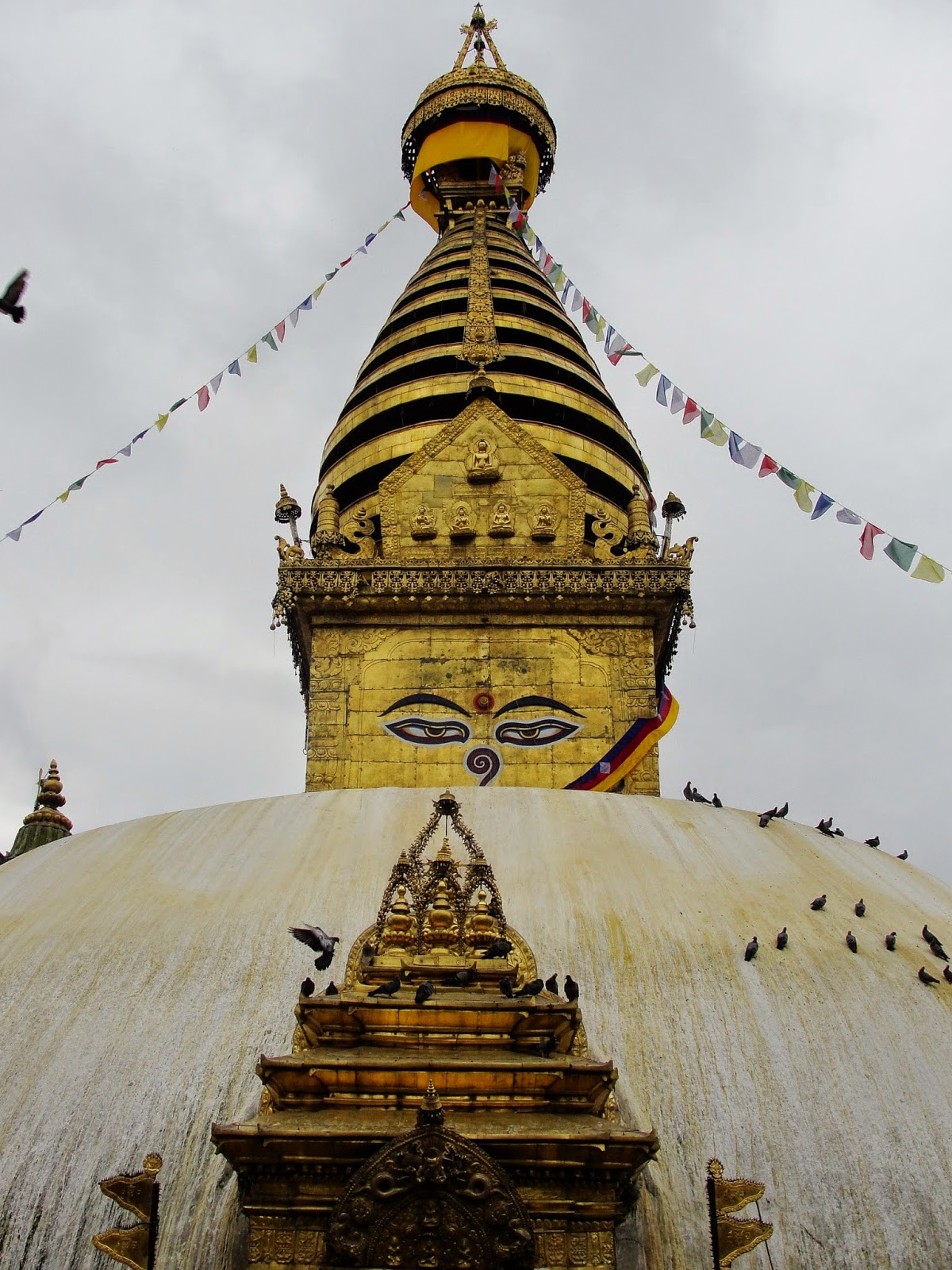 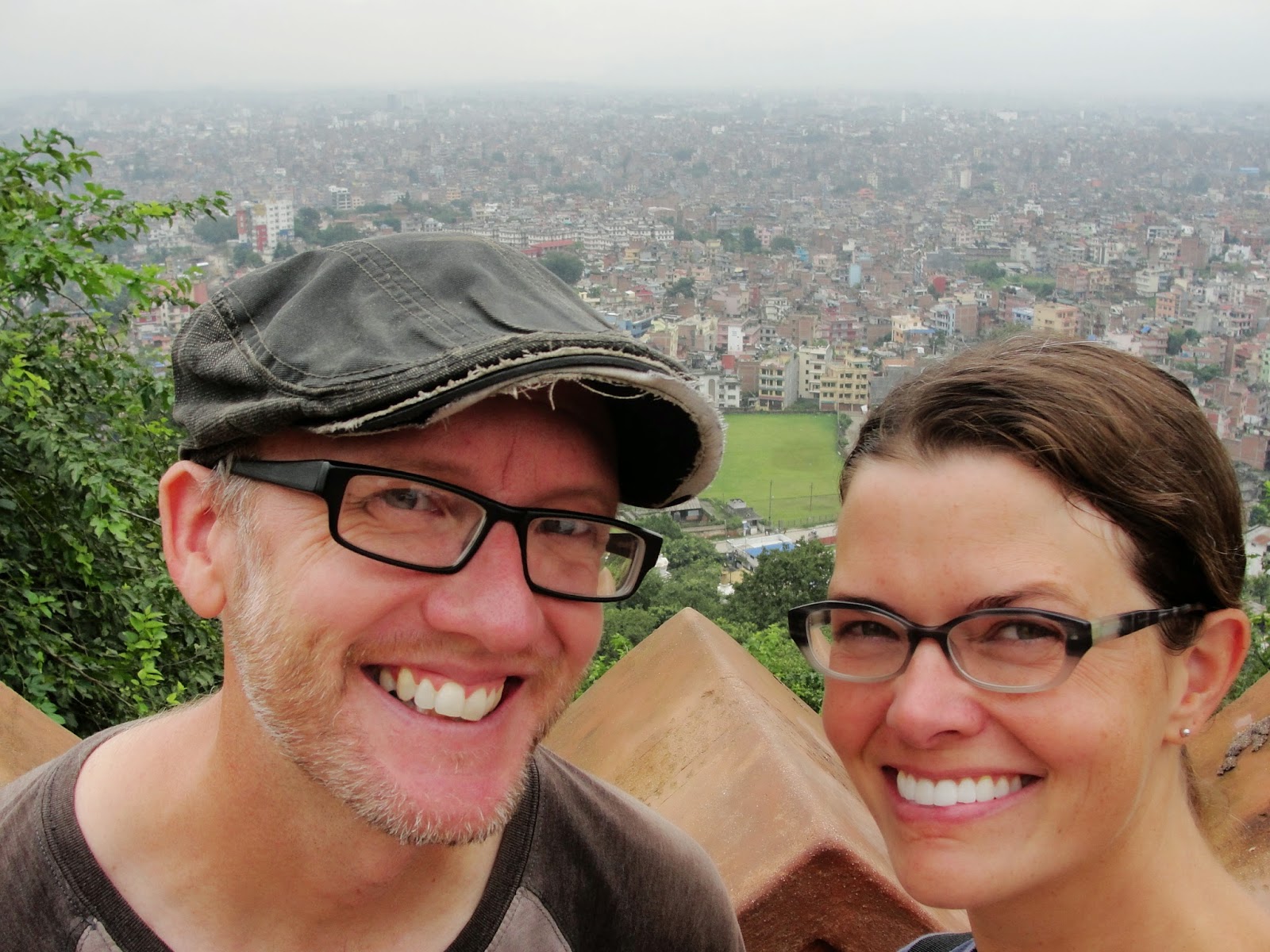 the views from the top were nice though

In Pokhara we joined our new guesthouse friend on his city tour. It was quite a whirlwind couple of hours but we saw a few things we wouldn't have otherwise seen... 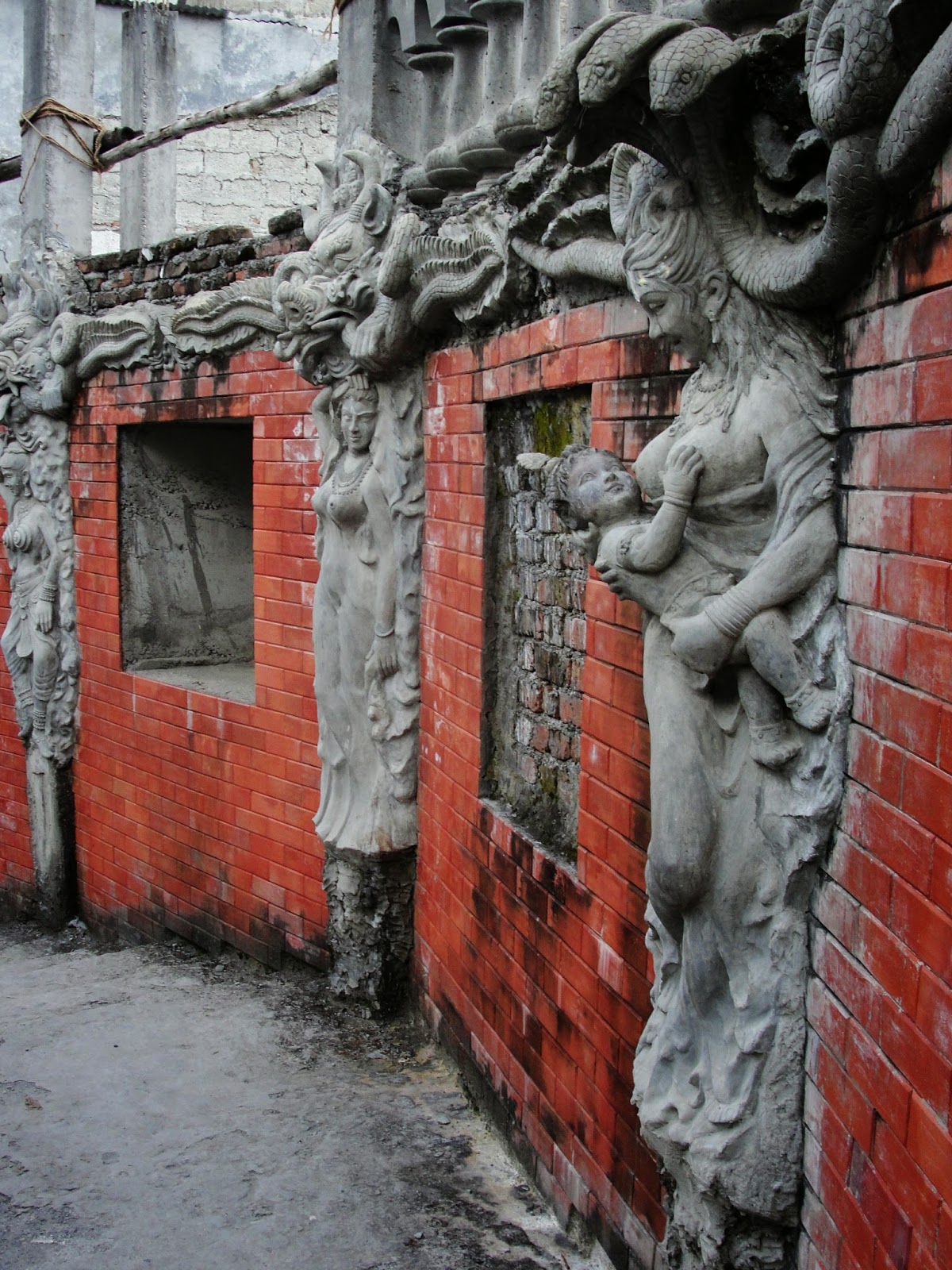 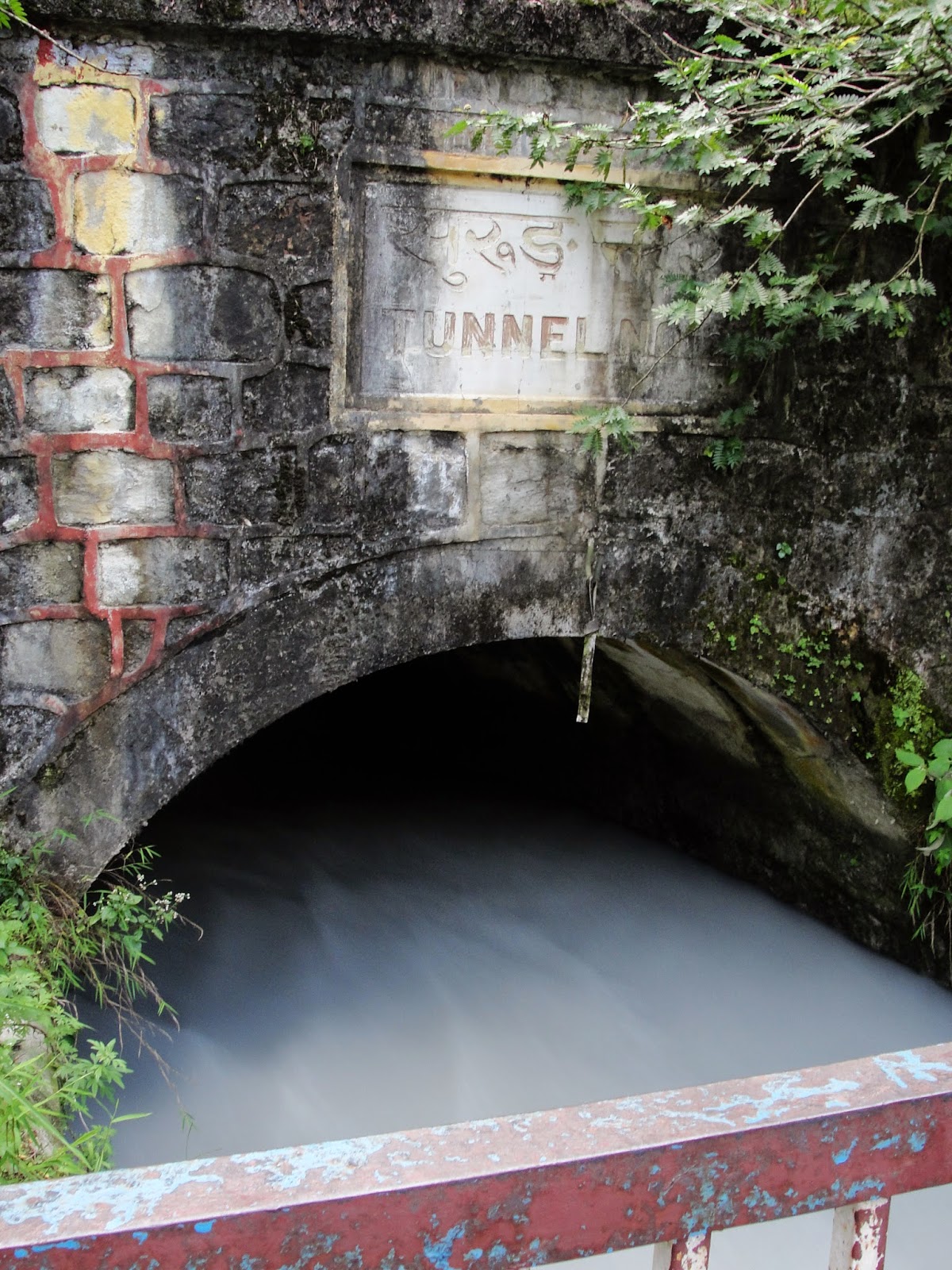 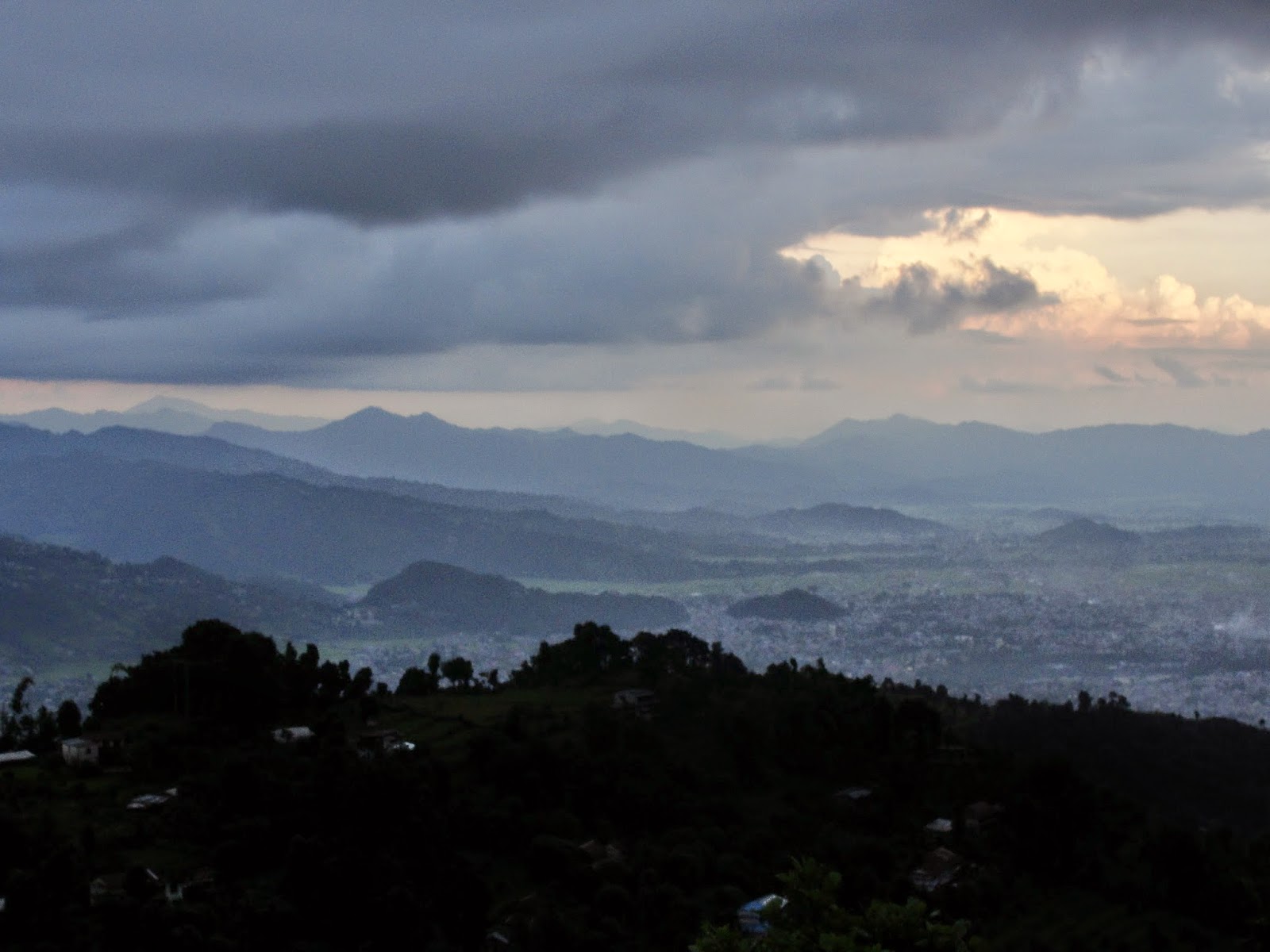 and the amazing sunset from Sarangkot view point

We also visited the fantastic International Mountain Museum where we learned a ton about mountaineering history, the geology of how the mountains were formed... and of course, yetis. 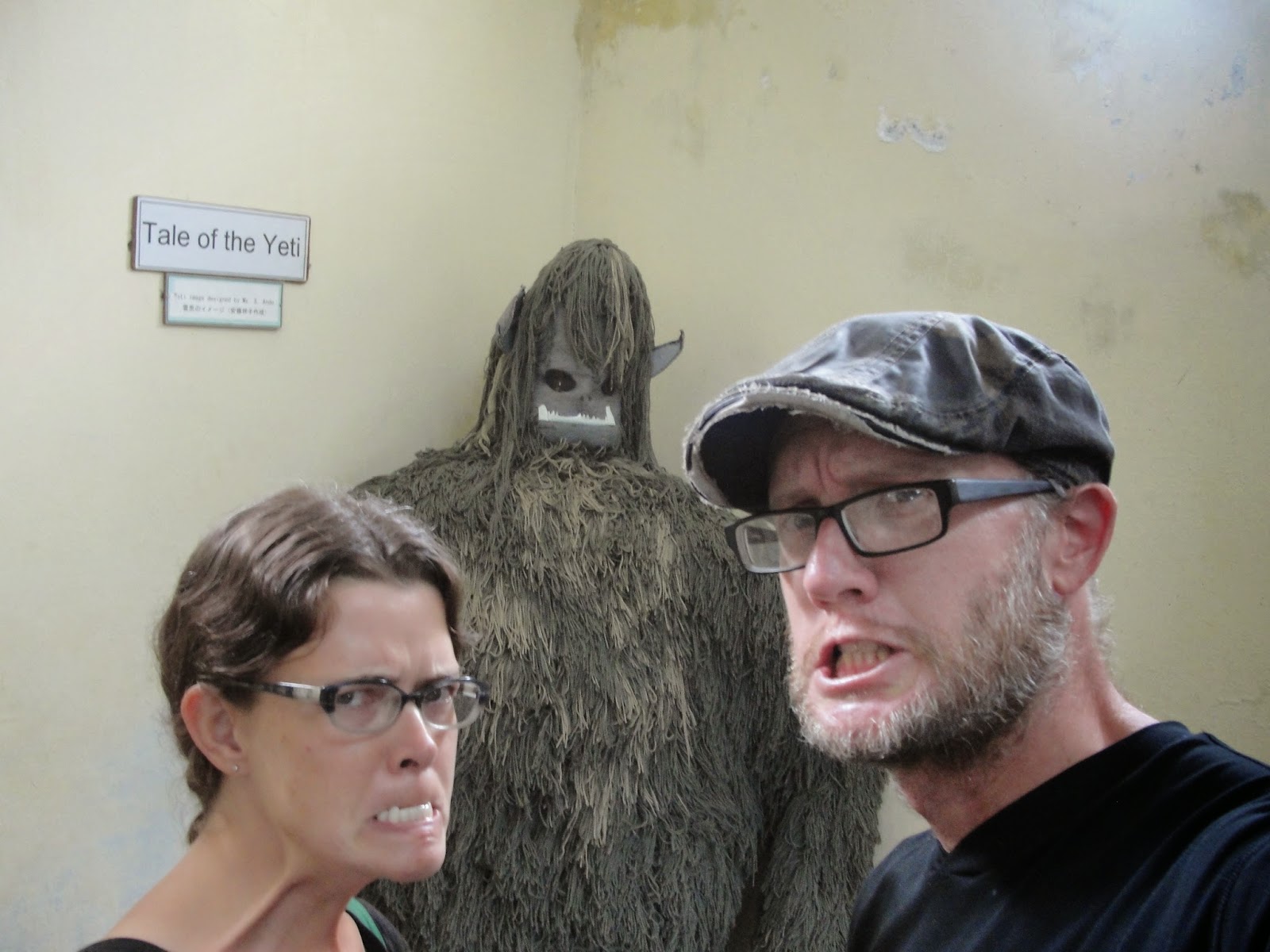 And that was our seven days in Kathmandu and Pokhara.

Food notes: where to even begin... 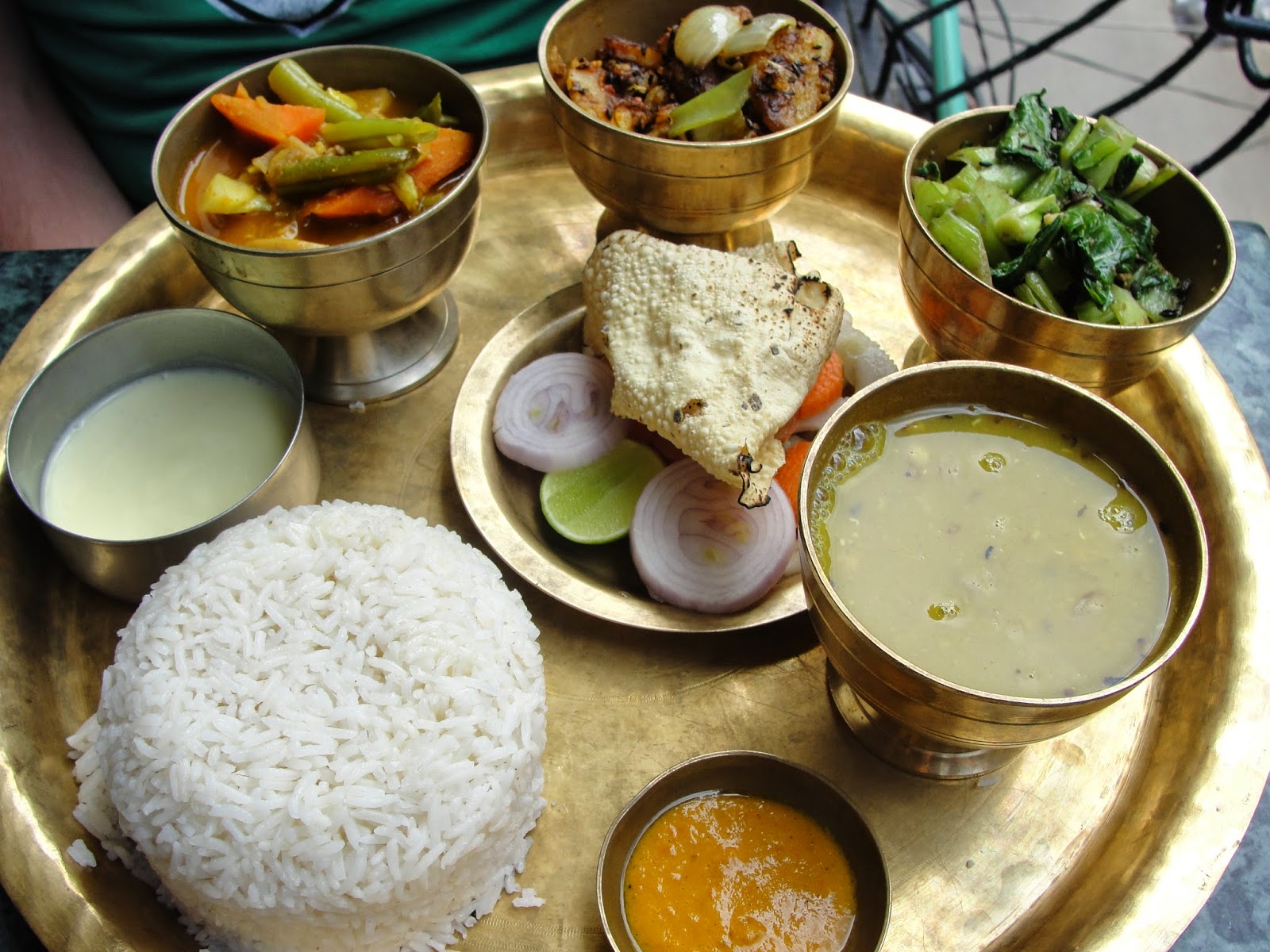 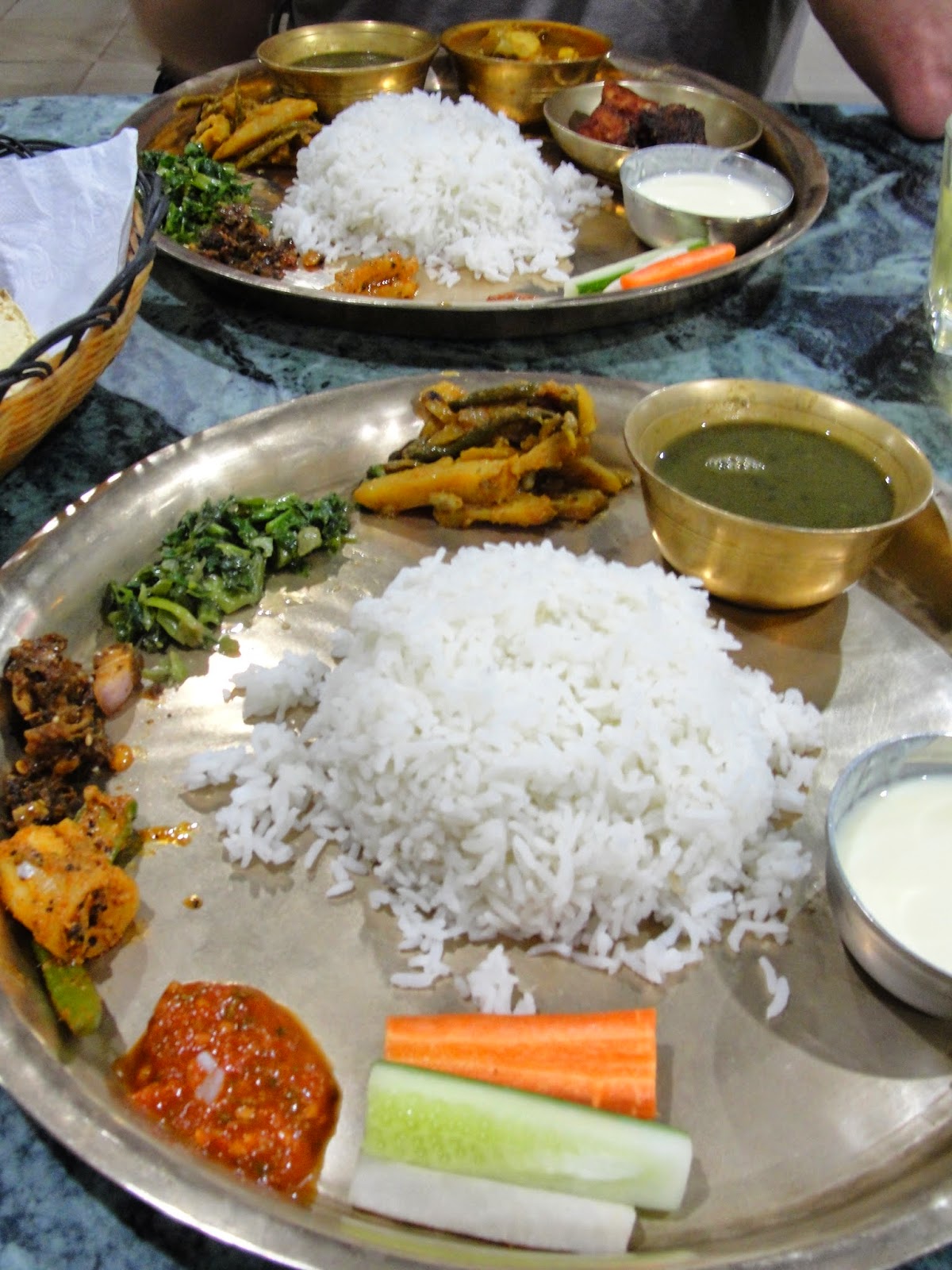 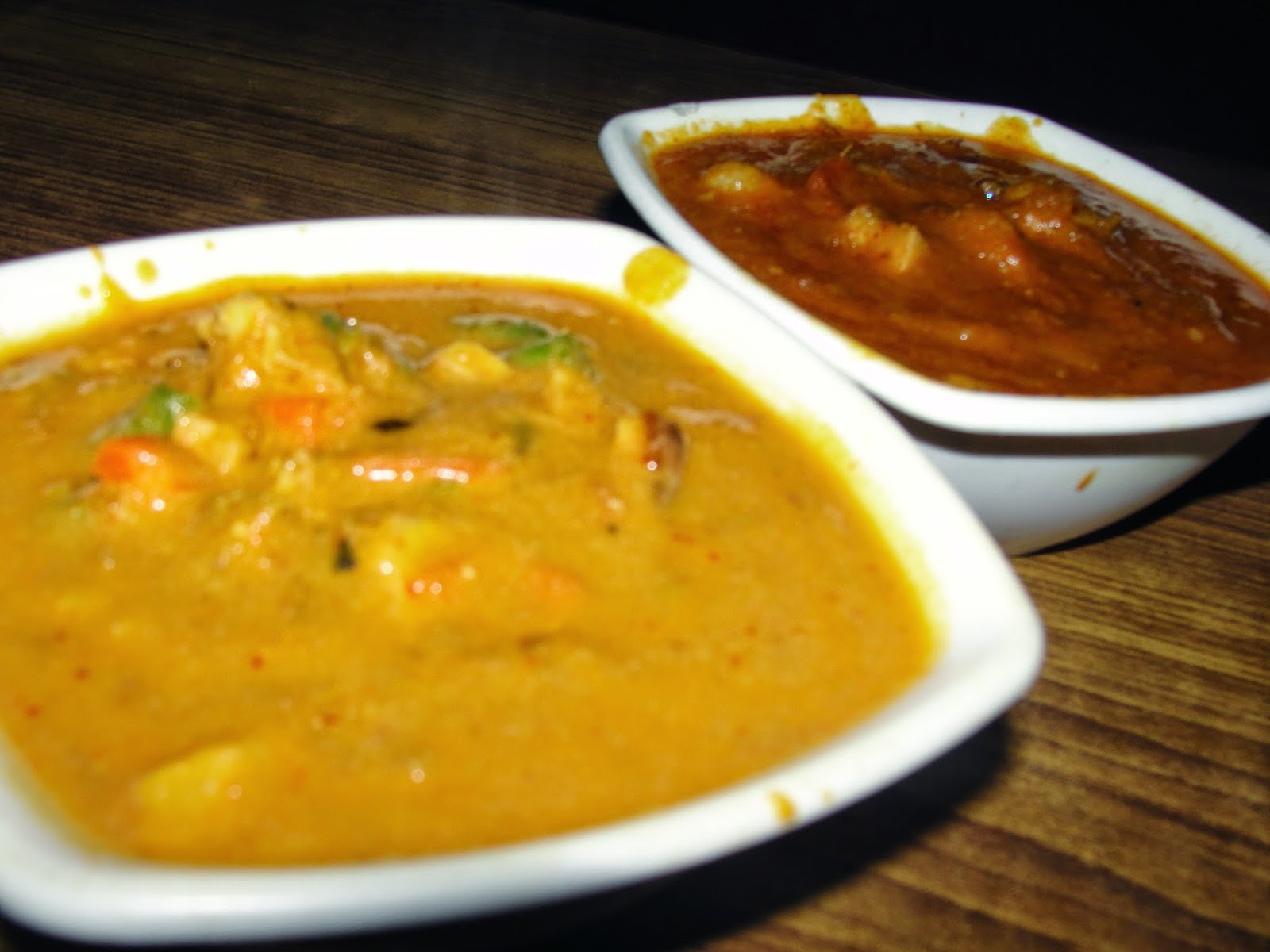 dinner at Shree Lal, our favorite Kathmandu restaurant,
looked like this (we ate here four times) 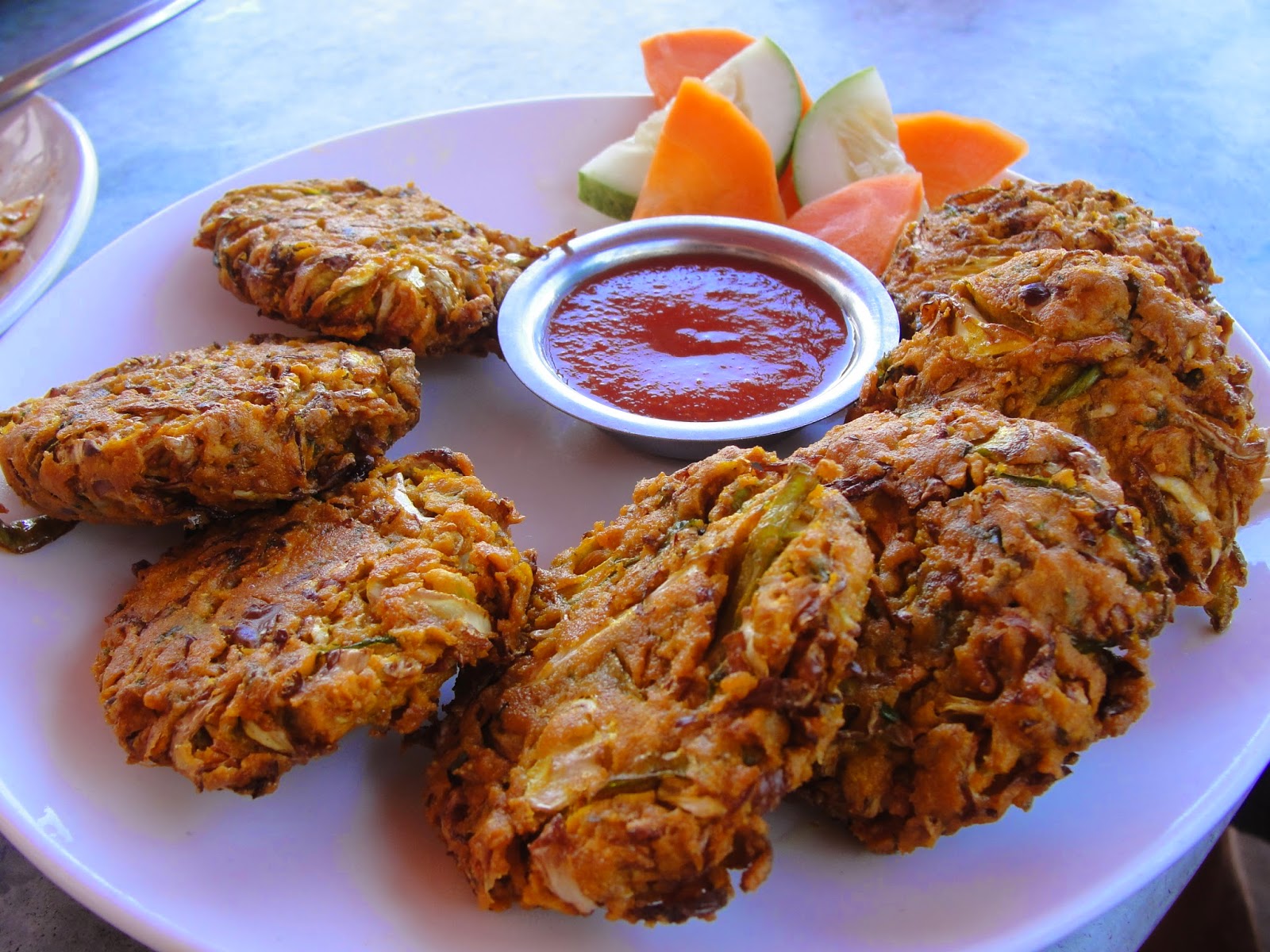 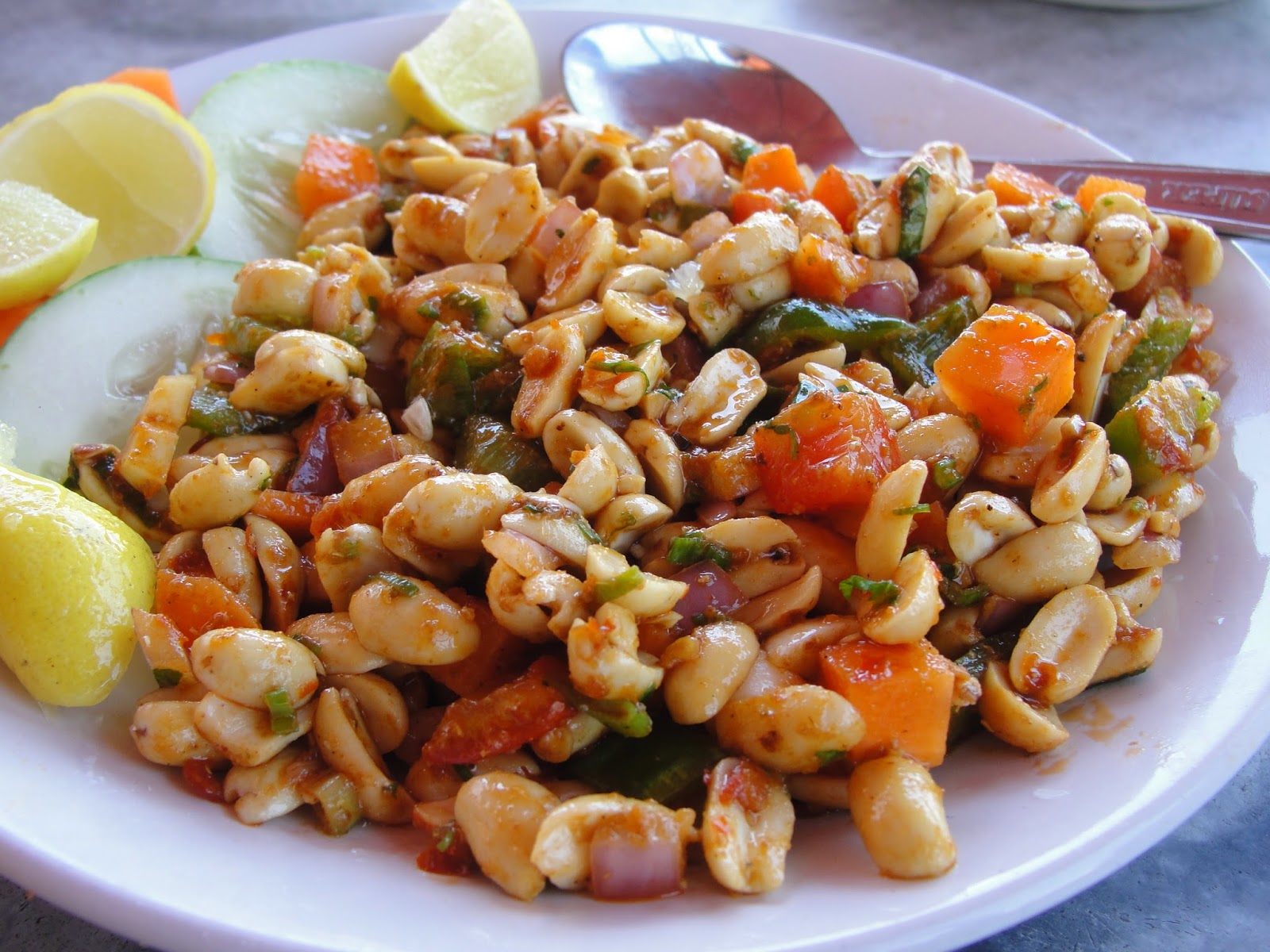 ...but we only saw peanut masala once
(and immediately devoured it) 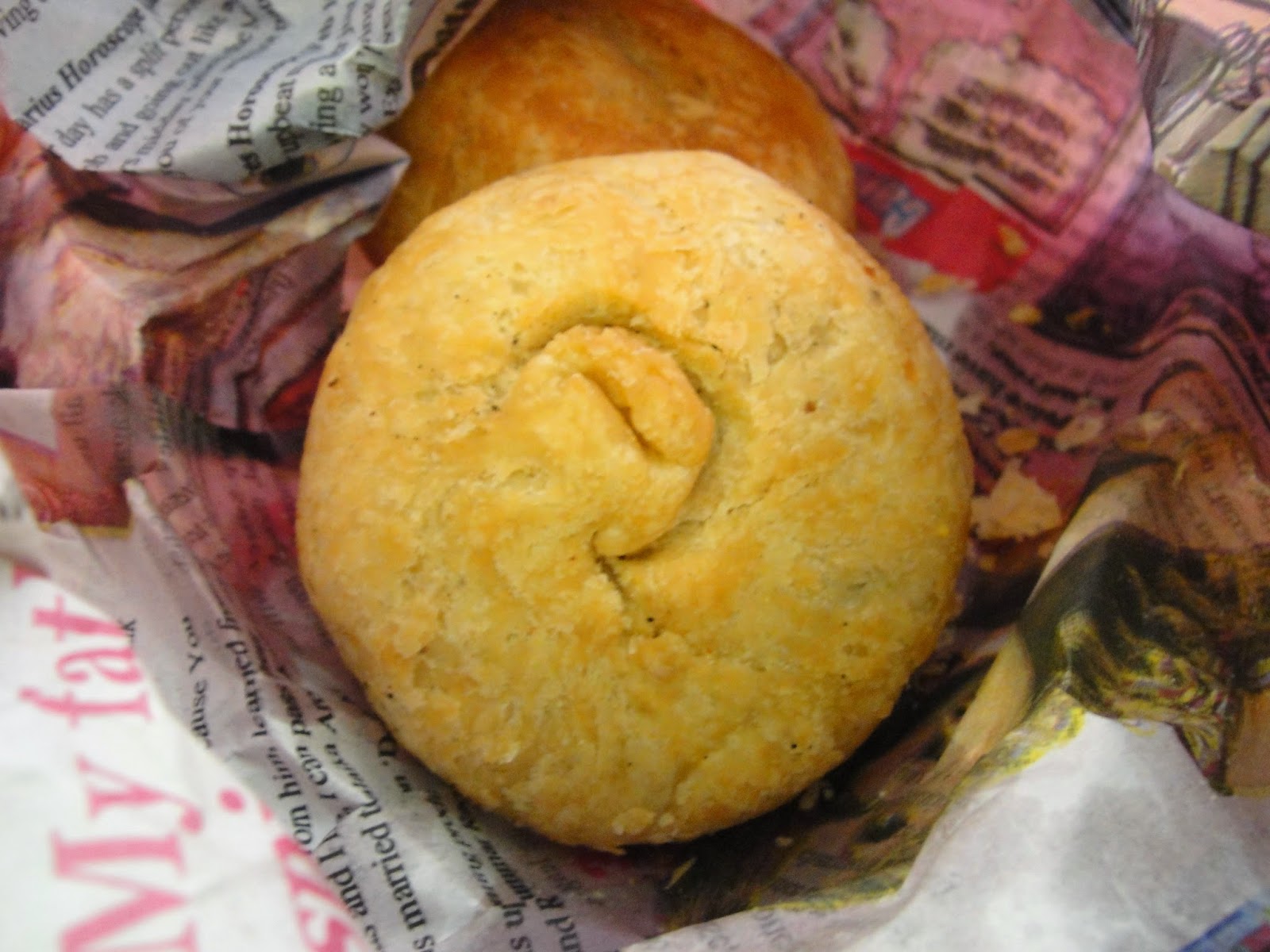 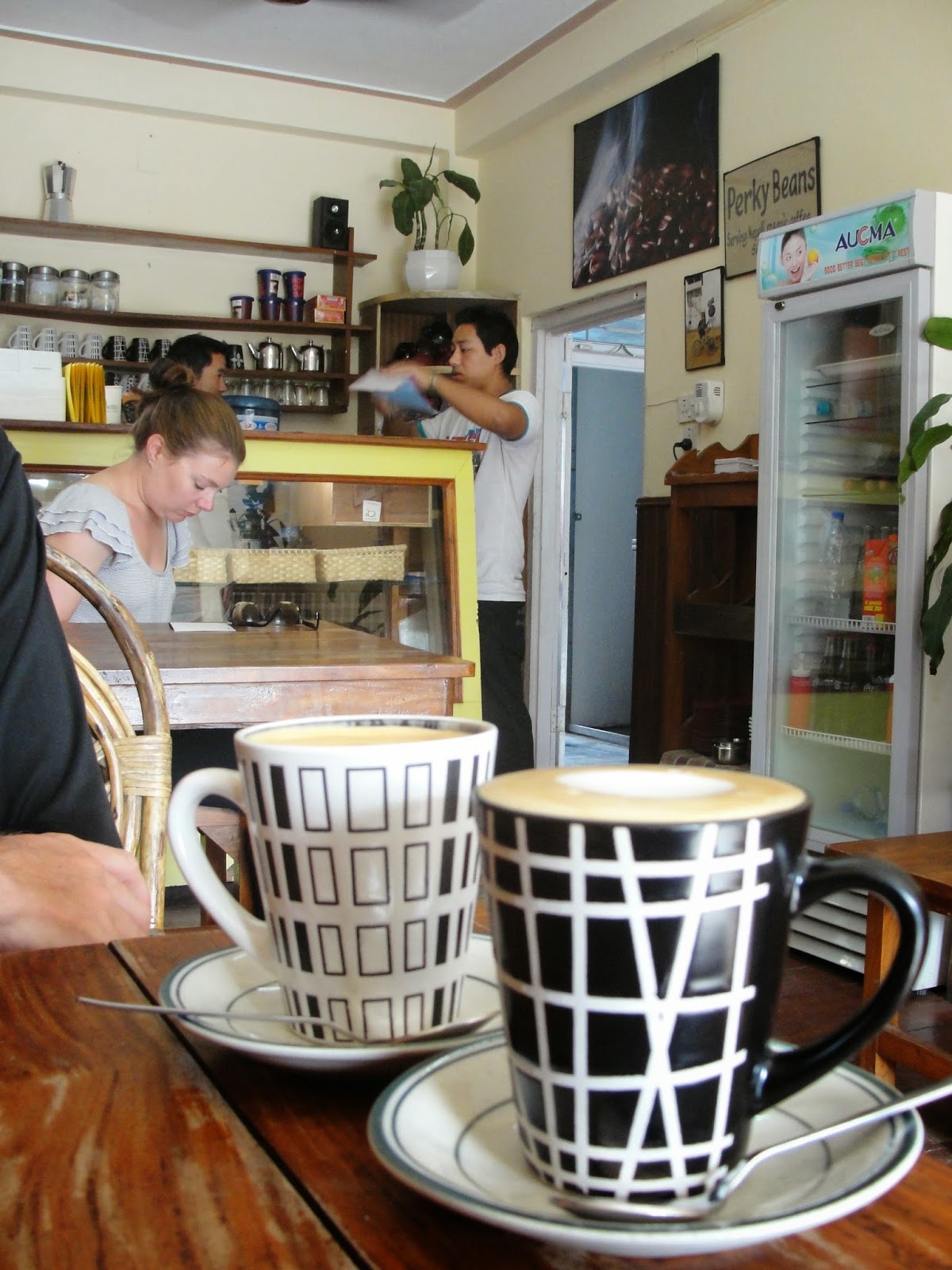 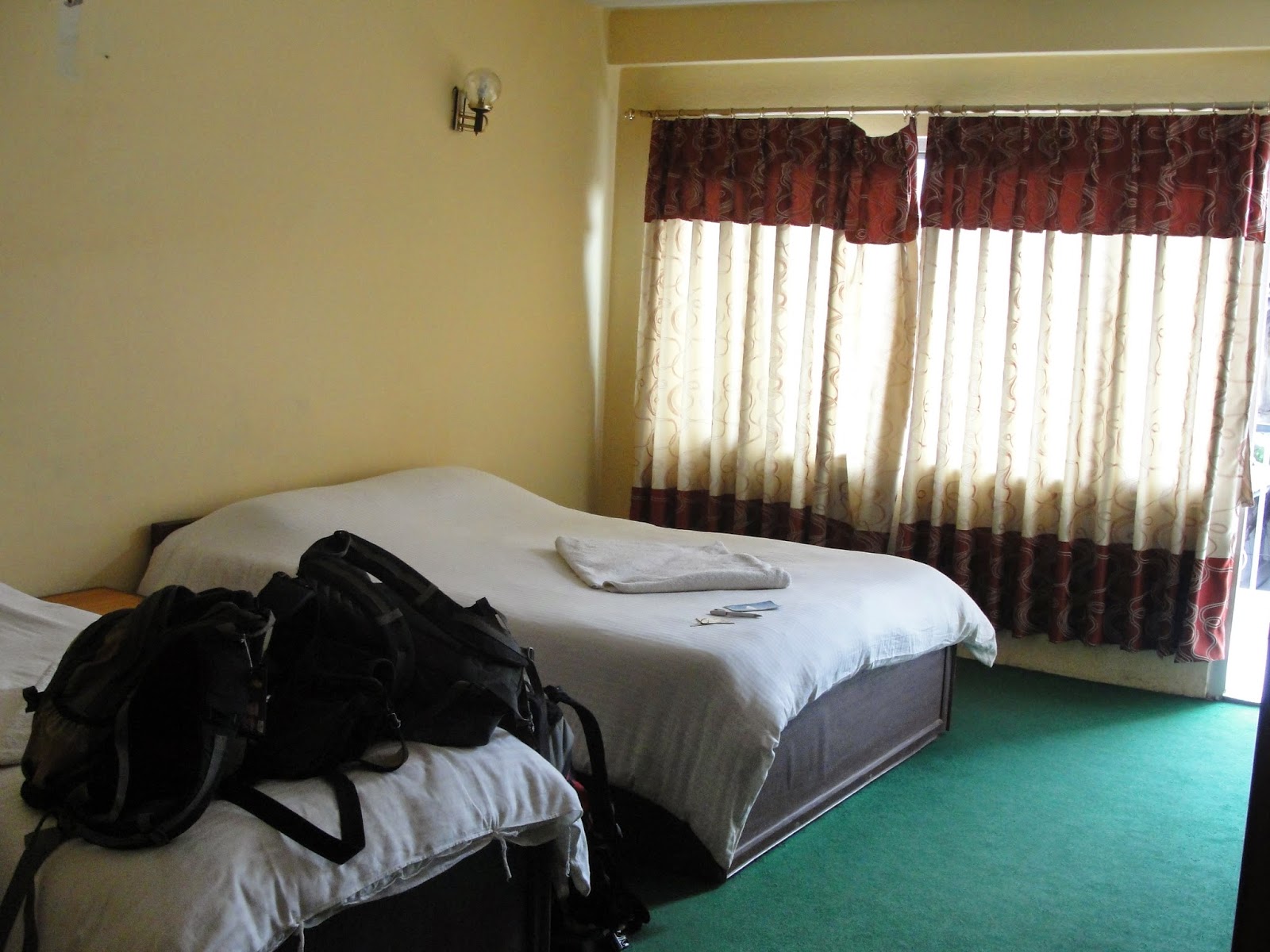 When we got back, they were full but their partner hotel had availability so we went to... 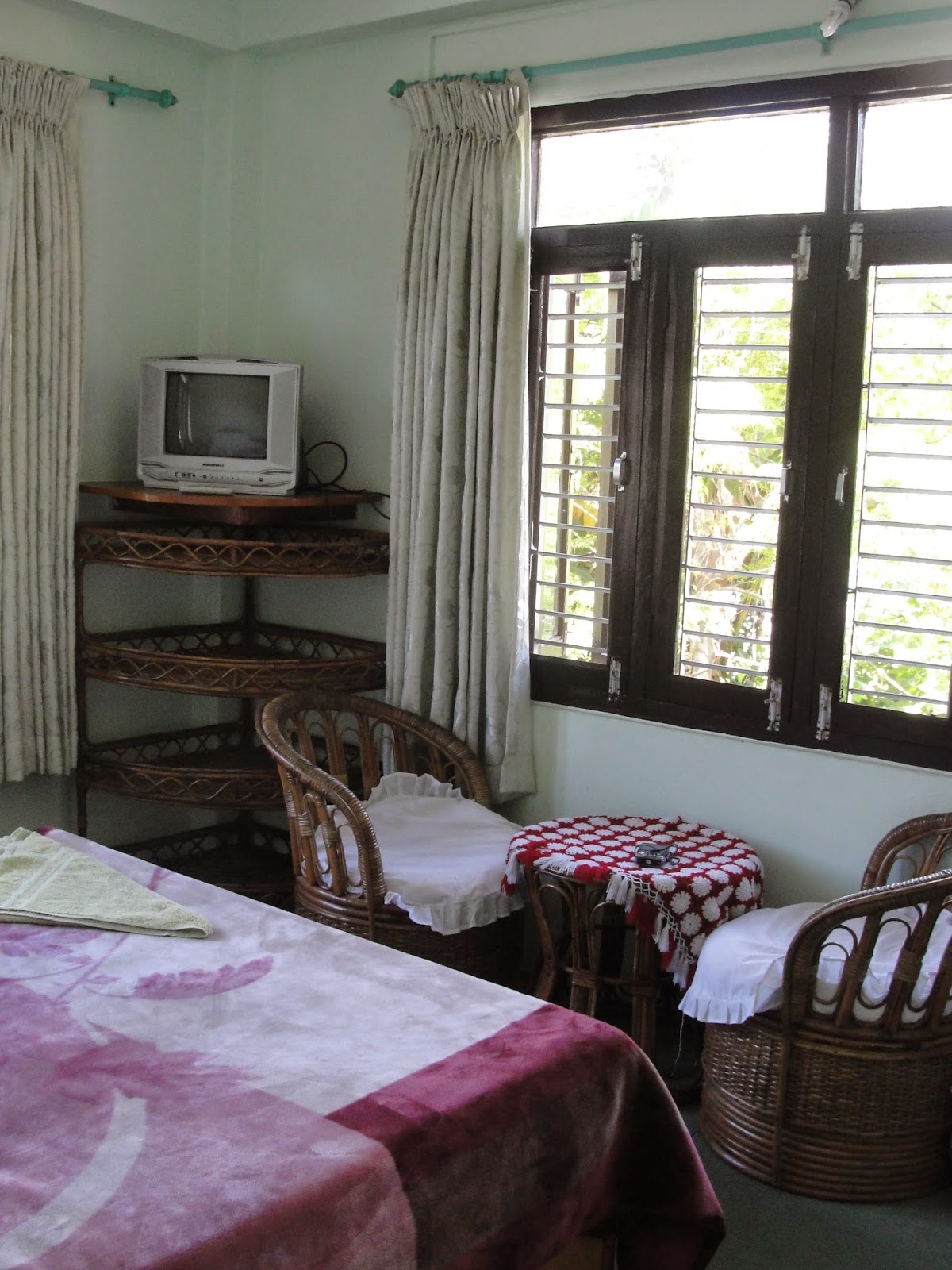 Shopping notes: we don't normally shop, but in Kathmandu we had the honor of meeting this lovely young lady and we bought a few things to support her co-op. Please do the same if you visit! 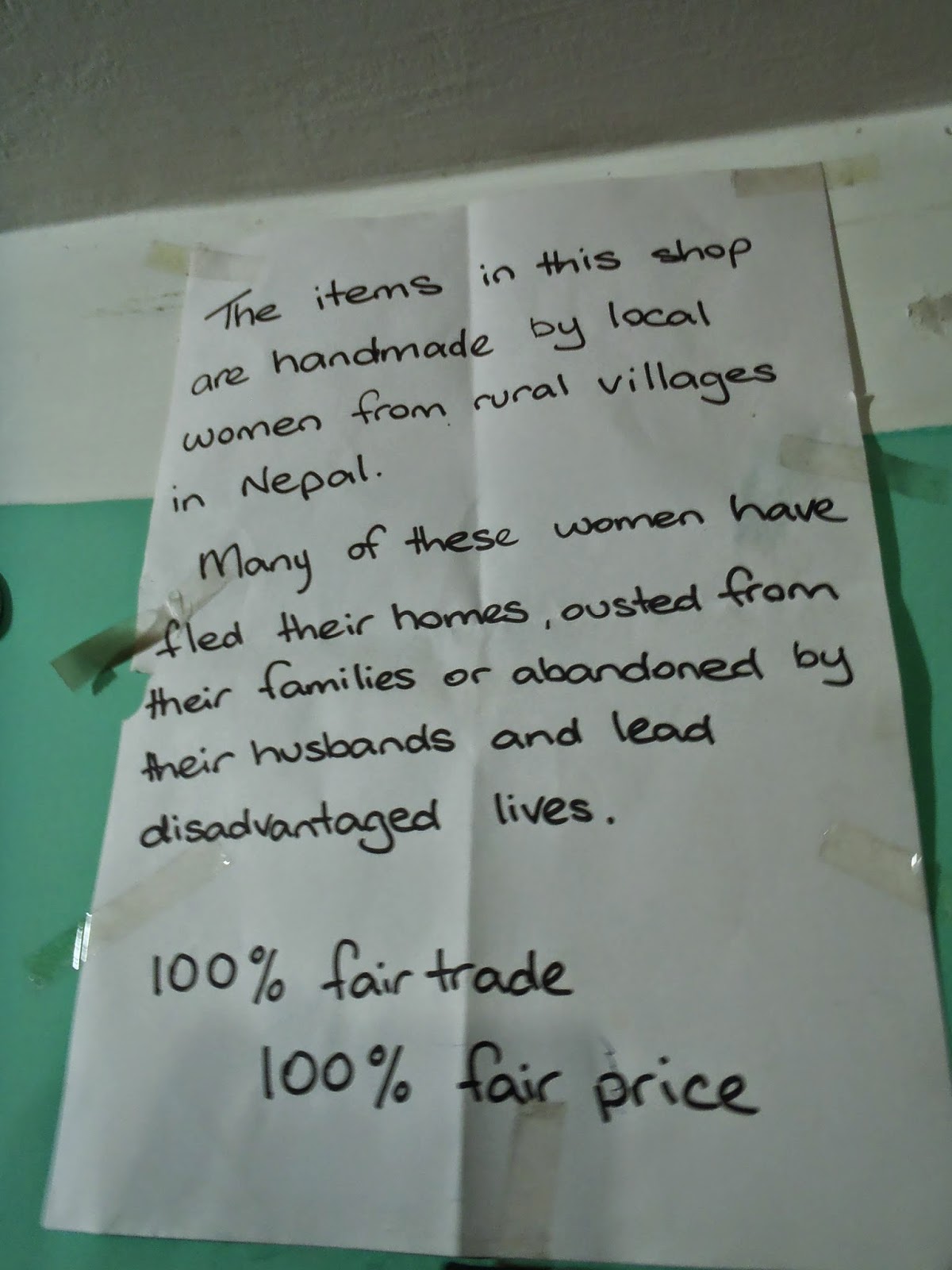 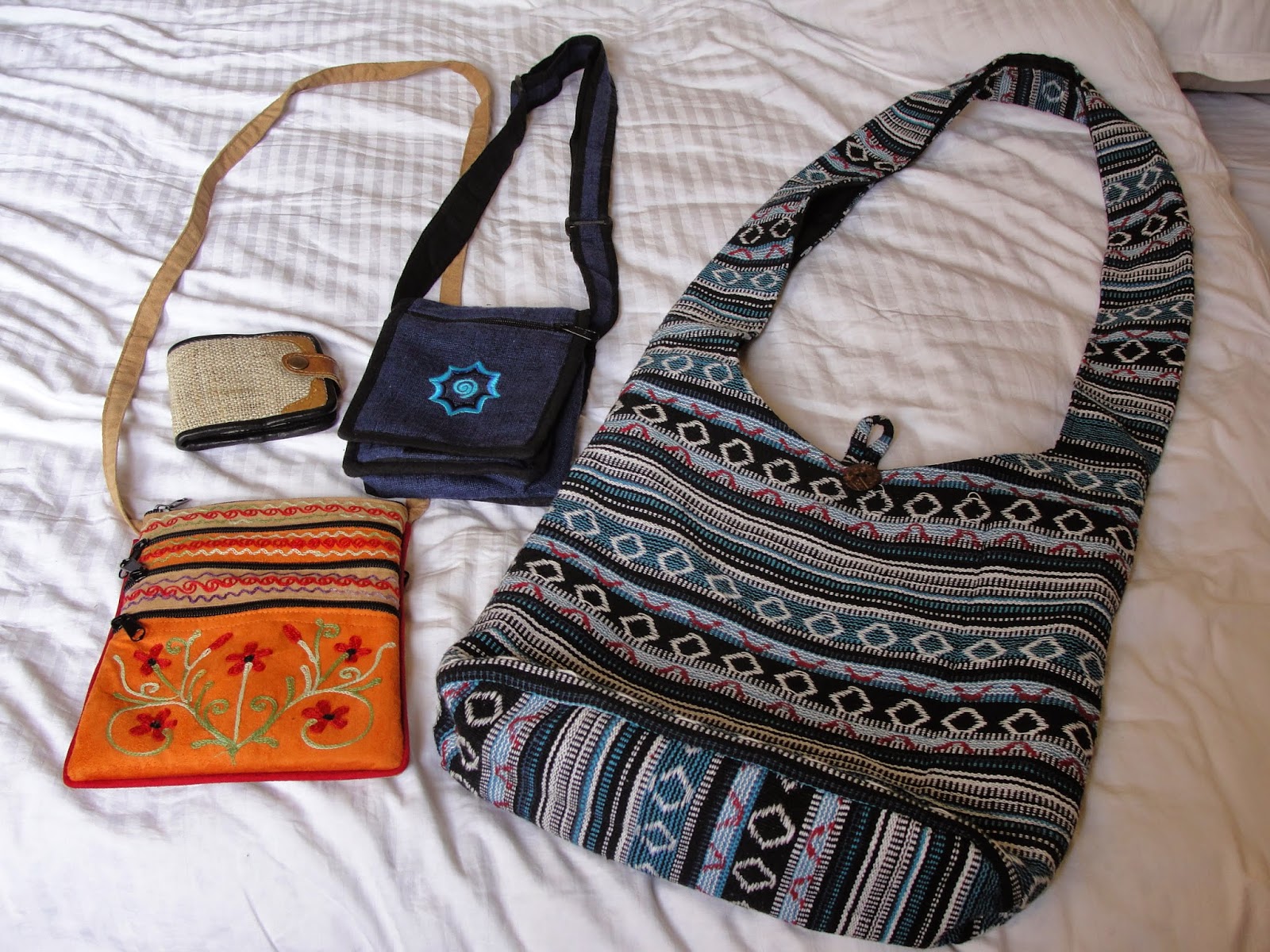 Nepal was our last non-western country on this journey and we loved almost every minute. We hope to return someday for additional trekking and a proper education on Nepali culture.

As I write this we're sitting in a caravan just outside of Perth, WWOOFing for an organic vintner. We just wrapped up 10 days WWOOFing at an eco-farm up the street. We're frantically making train reservations and arranging future WWOOF stays to minimize our costs in Australia. We miss the days of showing up and finding a hotel for the night, wandering the streets looking for tasty, inexpensive snacks, and the strange looks when we walk into a shop.

But the transition from Asia has been surprisingly easy. As we travel in comfort and eat familiar food, I am worried that we'll forget about the beautiful cultures and people we met along the way. And I don't want to forget how to live simply. There must be a balance between this and that... I'm officially on a quest to find it.